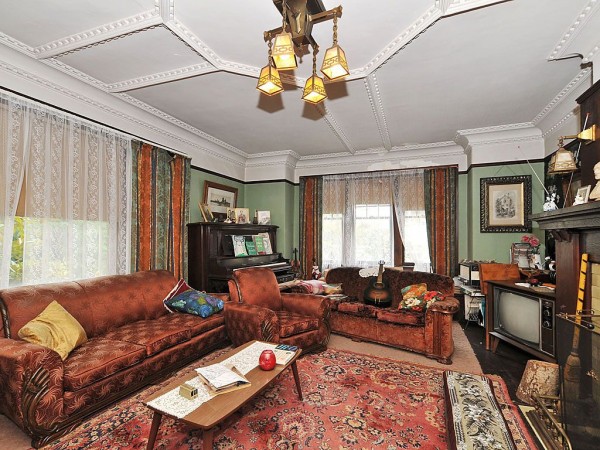 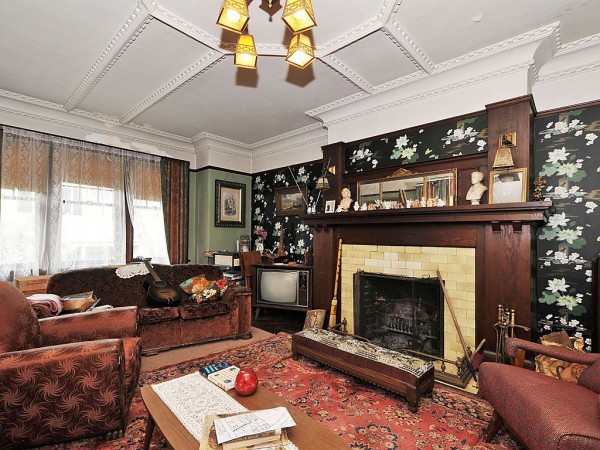 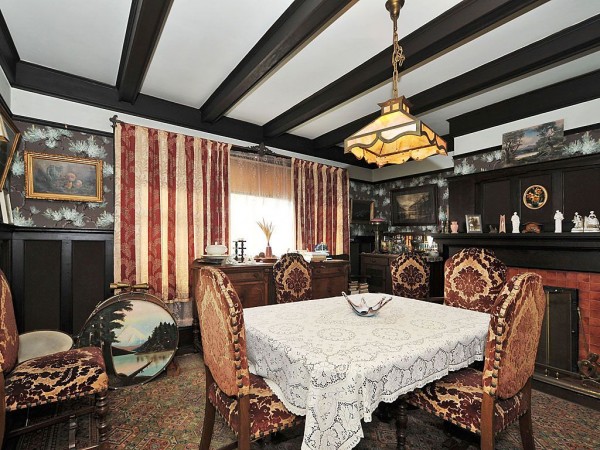 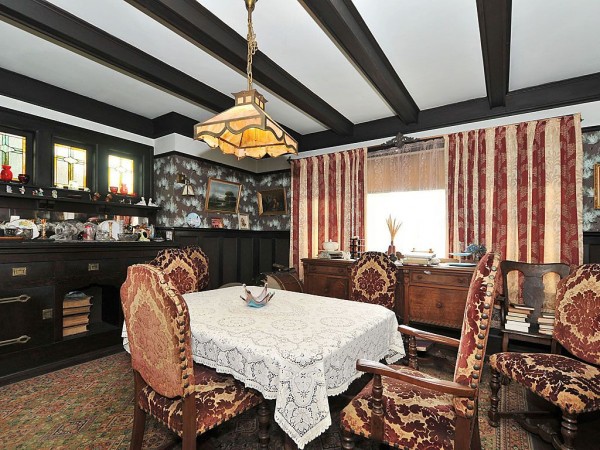 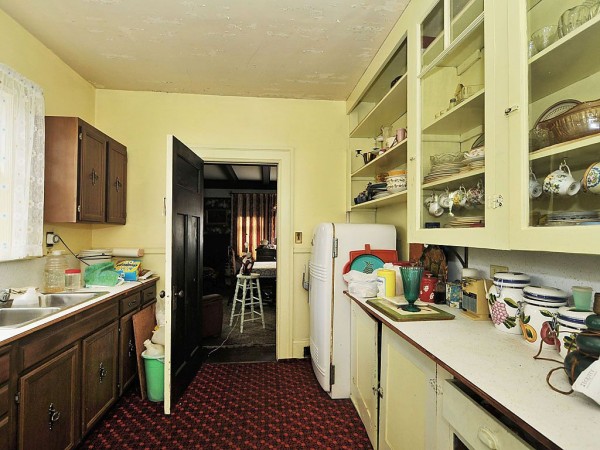 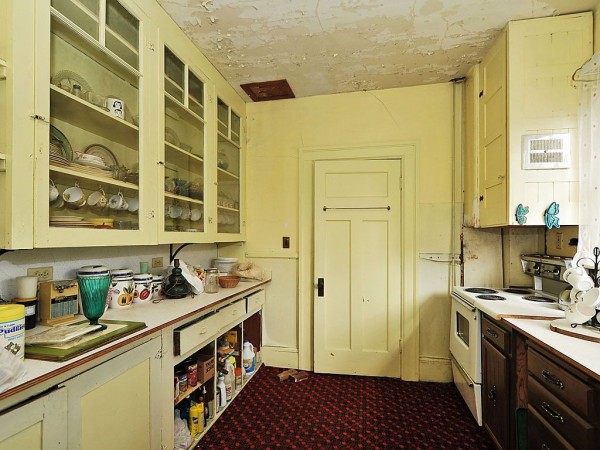 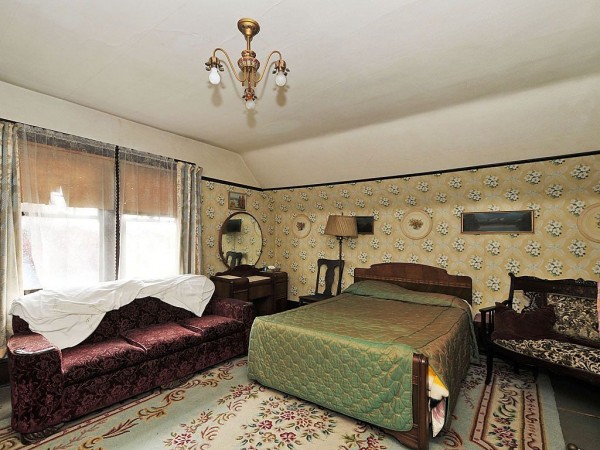 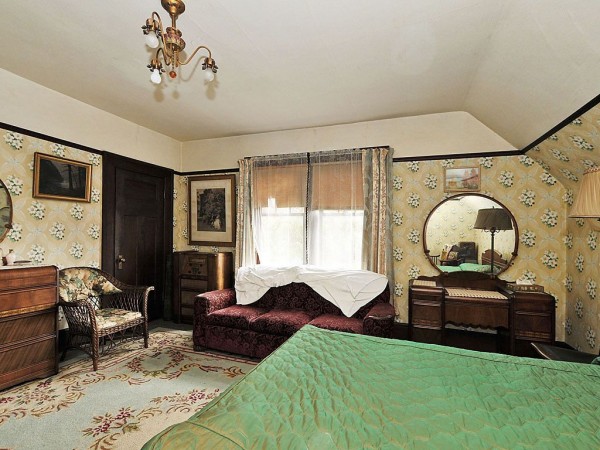 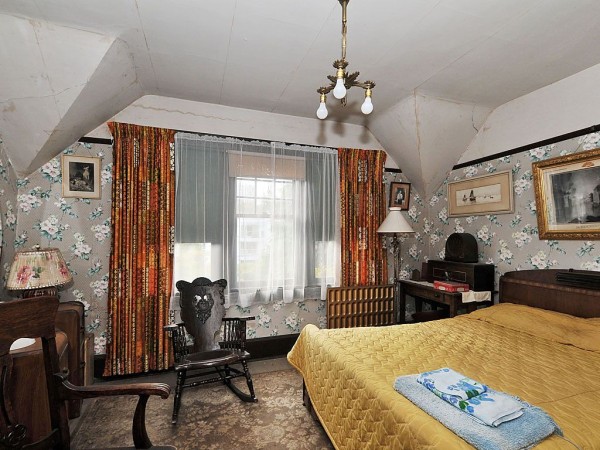 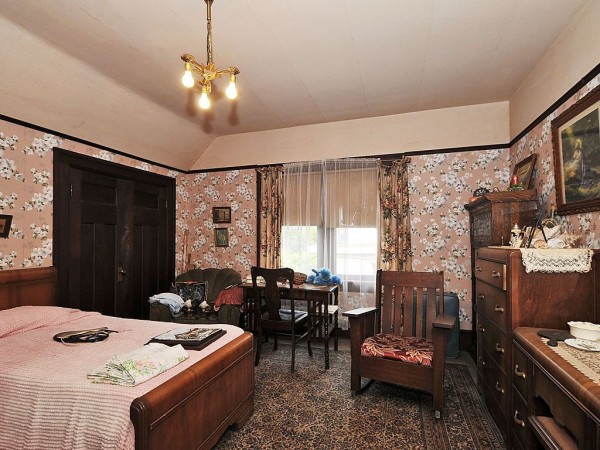 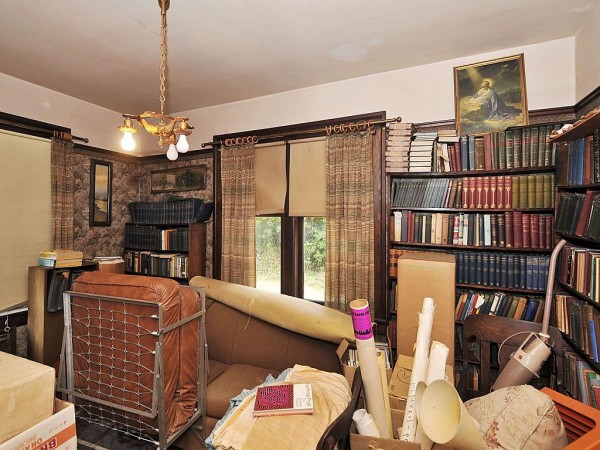 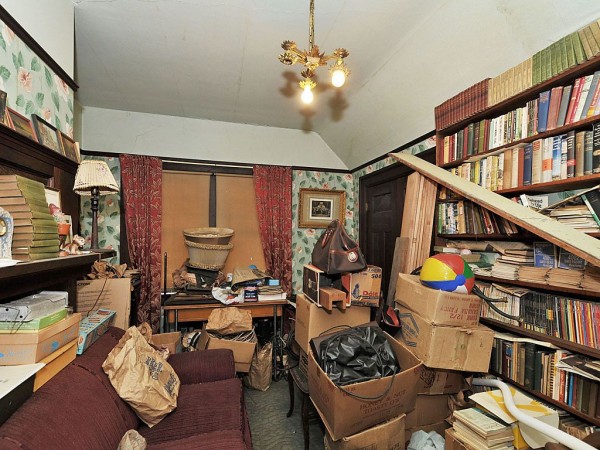 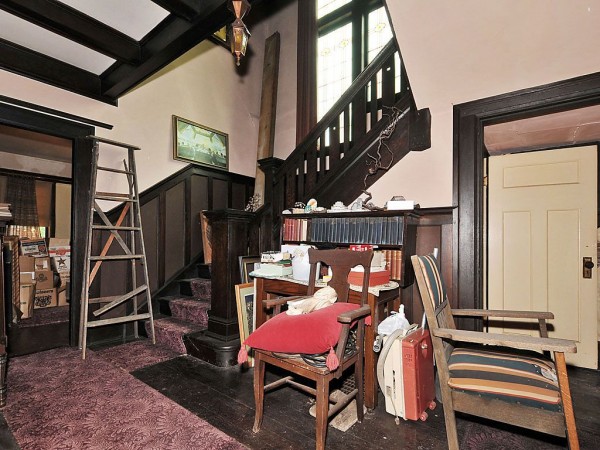 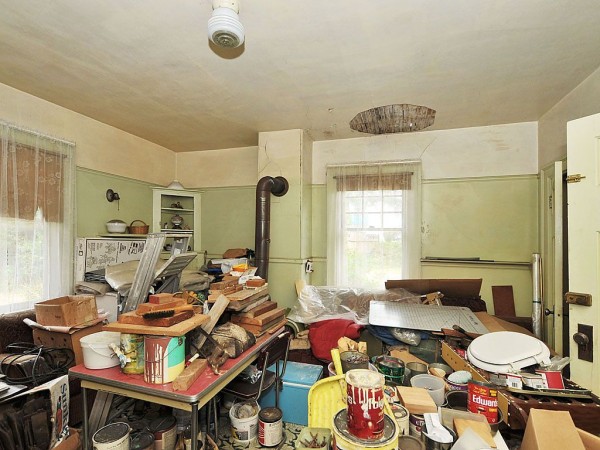 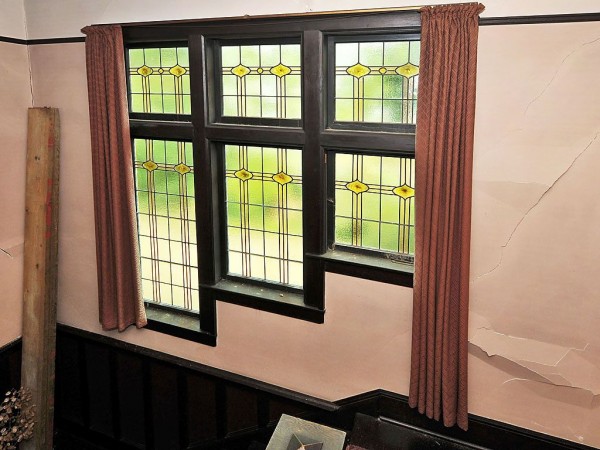 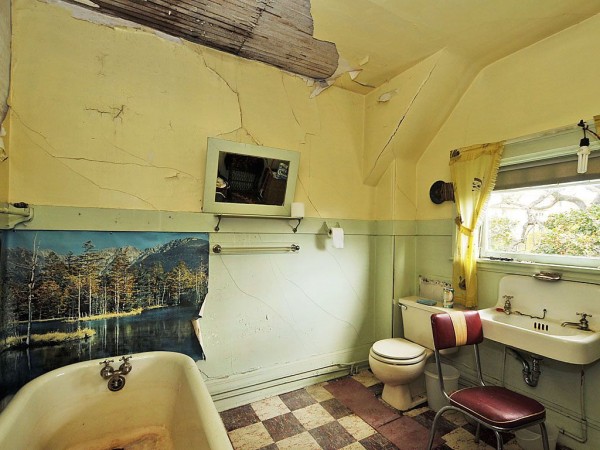 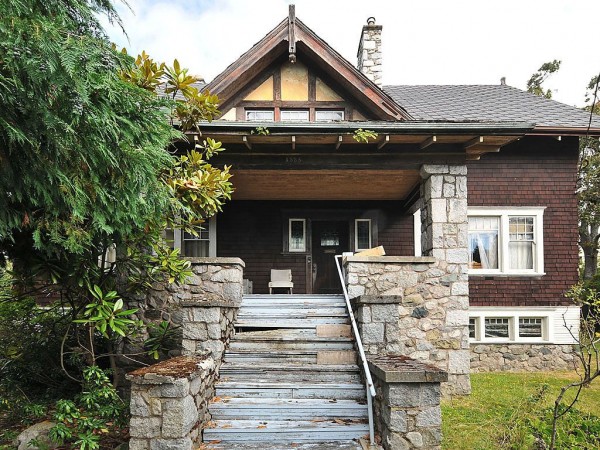 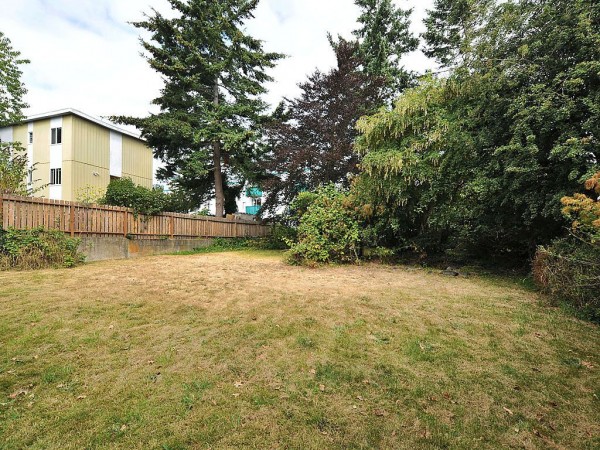 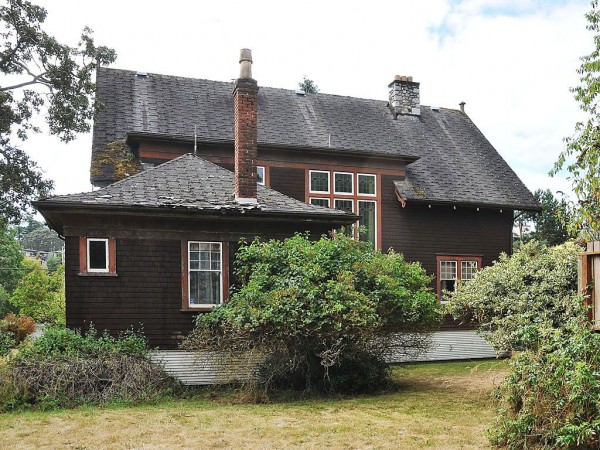 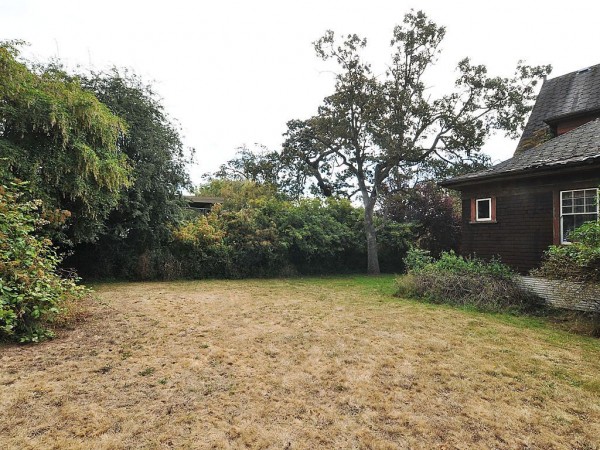 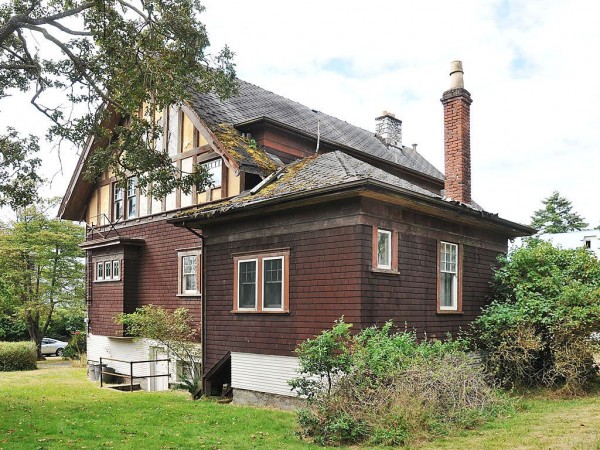 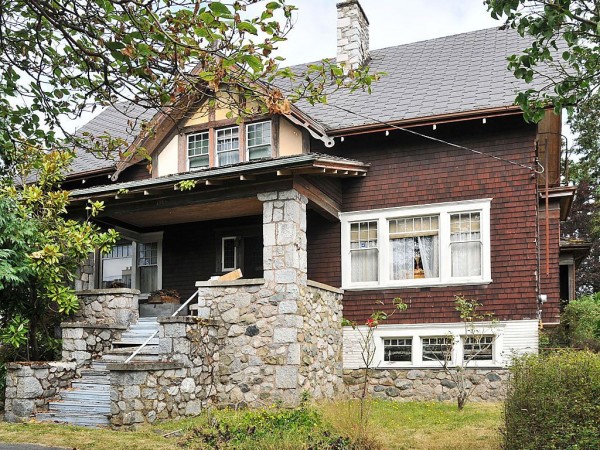 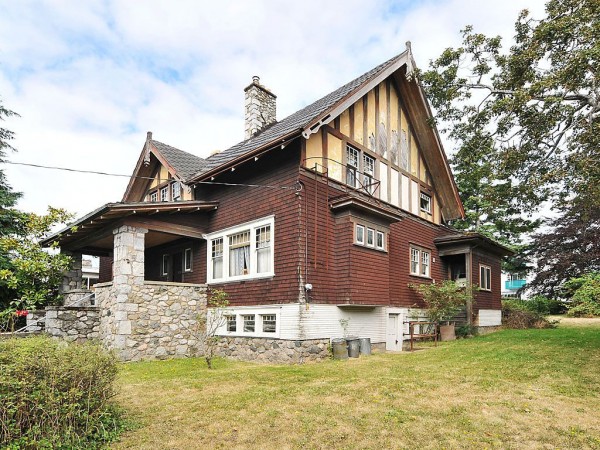 A unique development opportunity at the end of a quiet cul de sec close to Statacona Park and the junction. The Rochford designed house is heritage listed and must be preserved, it is a beautiful design and in amazingly original condition but will require total restoration. The city has indicated they will look favourably towards variances to enable this R3-2 zoned property, ( approximately 15800 sq feet), to be developed so as to preserve the house.

This handsome Arts & Crafts house remains an oasis in a high-density area, and – at the time of this writing – cried out for some TLC. It stands well back on a double-lot, reached by a curved driveway.

Built on a stone foundation with a full basement, the 1 1/2-storey, side gabled house has a simple symmetry, dominated by a dramatic stone porch and central dormer. The porch has a shed roof over the original front door and half-length leaded sidelights. The fieldstone has squared quoins and stepped stone balustrades. The gables all have half-timbering, unique pierced bargeboards, and remains of finials. On each side of the house there is a matching box bay with leaded piano windows.

This house was built for mine owner Hugh Miller Billings (c. 1854-1915), who resided here for several years with his wife Agnes. Born in Owen Sound, ON, Hugh came to Victoria in 1890. He engaged in mining and developing in the Salmo area of BC.

Henry Joseph Salisbury Muskett (1867-1947) lived here in 1921. Born in Norwich, England, Henry came to BC in 1897. In 1905 he began a long career at Government House (1401 Rockland) as Private Secretary to Sir Henri Joly Walker (1889-1980) in 1907. A great granddaughter of Sir H.P.P. Crease, Winnifred was an accomplished amateur radio operator, and in 1967 was named “Ham of the Year” by the BC Amateur Radio Association. She had started the hobby in 1939 to keep in contact with her son Arthur who went to work as a radio operator at a gold mine at Great Bear Lake.